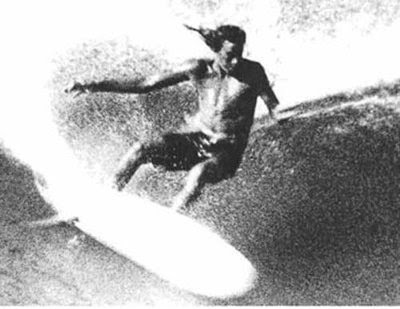 I went and saw Jolyon Hoff's film 'Searching For Michael Peterson' a few nights ago. Even before I saw the documentary, I recognised that in lots of ways it would be a sad and difficult tale to tell. Jolyon did well to source such incredible archival footage, edit it creatively with informative interviews, and give the subject deservedly sensitive and objective treatment. What emerged from the film most strongly for me was the story's ultimate tragedy: MP's misunderstood fall from greatness. It wasn't noble, not grand or heroic; just a sad quick slide into the terror & oblivion of mental illness.

Once the film was over, I drove home sad & restless. I have been thinking about it ever since. Even the great, good sea was not able to bear the weight of MP's madness. Is there anything more valuable than peace of mind? We should do much to guard it, & always be grateful for it.

So many surfers all around the world would rejoice to see Michael Peterson ride one more wave.
Posted by Nathan Oldfield