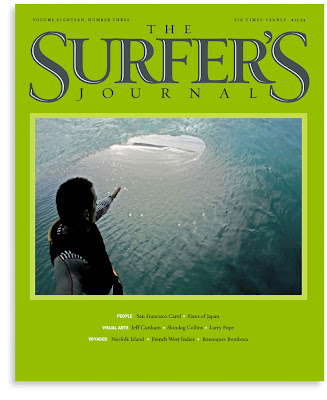 There’s a certain strain of pop psychology in our sport, and one of its central tenets is the supposed importance of the now. It’s Eckhard Tolle filtered through late ‘60s laissez-faire: paddle out and pull in the thinking goes, and for a few seconds the cares of life will be shorn away. It’s an attractive philosophy, and at its best it leads us into a focused awareness of our surroundings: the beads of wax on the nose of a board, the rills and lines on the face of a wave. For all the moments of transcendence, though, there are plenty of others when we find our thoughts taken elsewhere: the work we could be doing, or that email we got from the ex, or whether that sputtering four-stroke is going to get us home.

The moment, as most of us know, isn’t always kind, and surfing isn’t always the snake oil the salesmen would have us believe. Seaworthy, the new release from Nathan Oldfield, is perhaps most effective in its turning away from the focus on the moment and its subtle articulation of how surfing can shape the long-term progress of our lives. “For me,” the Australian filmmaker says, “why you surf is more importat than how you surf. I’m intrigued in the ideal of surfers who are so enchanted by the sea, who are so thankful for the gift of waveriding, who are so affected by the exchange, that they are actually upon the journey of becoming seaworthy.”

A feature-length film, Seaworthy is both an expansion and an improvement on Oldfield’s previous work. He has an artist’s eye, and his cinematography and composition are rarely short of beautiful. The surfing life, through Oldfield’s lens, is something that is abundantly rich in both grit and grace. The pacing is measured – as an editor, he leans toward scenics, closeups, and completed waves. There are a few falls and wobbles – but such is life, after all, and such is the reality of surfing. That’s not to say that the action isn’t top-notch: there’s accomplished longboarding throughout, and other standout performances include Sage Joske’s leg stalls, Christian Wach’s alaia slides, and Dave Rastovich’s work at a windblown slab.

Seaworthy is a film with a definite purpose, but Oldfield is mindful of allowing the viewer space to think; it’s deceptively simple and pleasantly diverse, and its chapters work as shorts as well as a cohesive whole. As an independent film, it’s a high-grade achievement. The thing that struck me the most, though, was the work that the featured surfers have put in to becoming such masterful riders of waves. Surfing, as seen here, isn’t a series of moments; it’s a lifelong process of practice and thought. The segment that will stay with me the longest, I suspect, is the one of Dane Peterson and his wife Belinda – the two of them turning and trimming and cross-stepping through the crowds, looking so casually and perfectly at home on the shifting medium that is the sea.
- Malcolm Johnson
___________________________________________________
Posted by Nathan Oldfield